As you may know, there is three “official modes” of playing Hearthstone. There is play mode where you hope to climb your way up the massive ladder, hoping that one day you can hit that legendary ranking, and then hopefully repeat that same feat every single month. There is the Solo Adventures which includes both adventure modes in order to play against various bosses from the realms of World of Warcraft, and there is a practice mode in which you play against the same very same innkeeper who greets you every time you start-up the game. Finally there is the arena where you draft random decks in order to gain prizes consisting of cards, gold, and dust.

What many of you won’t know, or won’t be familiar with, is the “Tournament” play mode. Its different from the other three modes, because its something that developed around the game, not through the game. It is a mode that is community driven, and expands or contracts based on the community’s demand for tournaments. Many of you may have seen some tournaments on twitch.tv such as ESL Challenger, Seatstory Cup, or Dreamhack, but for as many of you that watch these tournaments, very few sign up for tournaments yourself. Admittedly, some of these larger viewership tournaments you see on twitch contain an invite aspect to them where professional players are invited to compete for the prize pool in order to gain viewership, but there are a huge amount of tournaments that are open to the public to sign up! 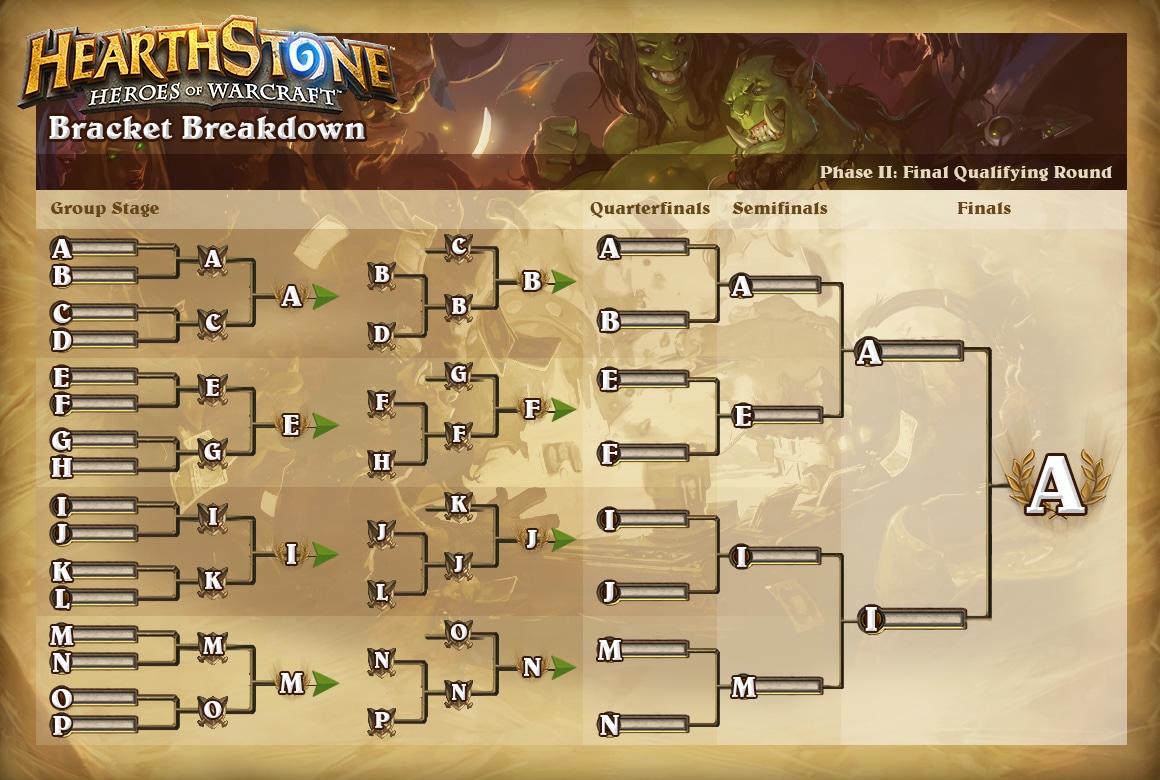 Before we actually go into how to sign up for a tournament, I want to touch a little bit on why you should sign up for tournaments. Almost every tournament has prizes for it’s victors, usually consisting of money and occasionally the benefit of World Championship Qualifier points, but the benefits of tournaments go beyond that.

First of all, tournaments are a great way to make friends in Hearthstone. Each and every one of the people you play in tournaments, you to your friend’s list in order to challenge. If you hit it off, or you really enjoy your games with an opponent, that may be start of a beautiful friendship… or rivalry. Personally, with a lot of the players on my friends list, when we enter tournaments, we try to go far enough in a tournament to play each other, even if playing each other happens to be in the finals.

In addition to the social benefits, tournaments are an excellent glimpse into the decks and play styles of different parts of the ranked ladder. The players in tournaments range from Angry Chickens to the top players of the Legendary ranks. Tournaments give you a chance to see how your play stacks up to the best of the best. Even if you lose your match against the higher ranking players, you can still learn from your losses. You may even get feedback about your play from your opponent!

First of all, obviously you will need Hearthstone. I’d imagine it would be pretty hard to participate in a hearthstone tournament without hearthstone installed. Personally I prefer playing on a desktop or laptop when participating in a tournament because often you will need to interact with a third-party website to report scores and view the brackets. That being said, it is still definitely possible to compete in a tournament completely mobile albeit a little inconvenient.

The next thing you’ll need is some decks. At a minimum, you’ll need one deck to participate in small single deck tournaments, but for a large portion of tournaments, you’ll need three different decks from three different classes. If possible, make sure that you are comfortable with these decks as you’ll have to win quite a few games with them to make it far in a tournament. Generally, you will want to pick decks that you are comfortable with, not necessarily the “best decks” that you may see your favorite professional players use in tournaments. You are far more likely to succeed if you  play what you know.

Finally, probably the most important requirement is time. Tournaments are by nature lengthy. Generally a bracket of 128 players in a best of 5 format takes anywhere between 4-6 hours. If your going to participate with the intent of making it far in a tournament, make sure you set aside a large chunk of time to compete. I know from personal experience that it sucks to make it to the semifinals or finals of a tournament only to leave due to time constraints. Not only does it suck for you to have to leave, getting a default win later on in a tournament is nowhere near as satisfying as earning that win.

This is an area where a lot of people  have a lot of trouble, but it is a lot easier than it seems. To start off I want to showcase what is probably the most useful hearthstone tournament (and hearthstone event resource) around.

This is an online calendar of pretty much anything and everything hearthstone related. For the purpose of finding open tournament, this site makes it easy to find what you’re looking for. The search function on the right hand side of the website is easy to use and self-explanatory. Once you find the tournament that fits your schedule, take the link listed to sign up! Although the Hearthstone Calendar covers just about everything in the tournament scene, there are two more sites that I’d really like to touch on. First off is Strivewire.com. Although Strivewire is relatively new as a tournament bracket provider, it features a very clean and convenient format. Strivewire allows players to pick their classes through their platform unlike other bracket generators which force the players to manually tell each other their classes in game, leading to possible error or foul play. Additionally, Strivewire has built-in alerts on their platform to notify players when their next match is ready. Currently Strivewire is in beta, and has a few kinks to sort out (such as payouts only being in euro), but for the most part, seems to be the cleanest tournament platform around and I highly recommend playing visiting their site to participate in tournaments. They also have their own nifty ladder system where they rate players based on their performance in tournaments on their site!

The second site I want to touch on is ESL. Esl is a large Esports organization with massive resources to at their disposal. You may have heard about them from the ESL hearthstone Legendary Series, where players fight through open bracket Challenger tournaments to face off on their weekly Legendary Series against pro players. This is where you sign up.  In their Challenger tournaments, the top two finalists are invited to a week of the Legendary Series to compete for a sizeable prize, and a ticket to their finals in Burbank, CA. These Challenger Series tournaments are on the larger side of open tournaments, and you will face off against some of the best of the best. Its pretty common to see professional players compete in these challenger series because of their high payout prizes. If you’re looking to be recognized or make a name for yourself, this is the tournament to do it.

The last subject you should know about before you’re all set to start your tournament life in hearthstone is the format. Currently the standard format for tournaments (and the format that will be used in the 2015 World Championships) is the Conquest format. The way the conquest format works is that the winning deck of a game is eliminated until there are no decks left for a player to win with. Between matches, both players are allowed to switch their decks as long as they do not switch to one that has been eliminated. Keep in mind that decks are synonymous with classes in this case because for a majority of tournaments sideboard (where you switch cards in a deck) is not allowed. Additionally in the conquest format, generally classes are announced before the series starts, allowing you to make decisions on which decks to open  with, and to play during the games after. As far as strategy goes, currently there is no dominating strategy to ordering class picks in the conquest format. Some players favor playing their weakest deck first, while others favor playing their strongest decks first. Some professionals, such as Archon Xixo favor just randomly picking classes. He says that “the only reason to order picks is to mind games your opponent. If you pick randomly, you can not win or lose the mind games simply because you are not participating in them.” Ultimately though, how you decide to pick your deck order is up to you. Figure out what works for you and then stick with it.

Although the conquest format is generally similar throughout the various tournaments, make sure to check the specific rules of each tournament because the specific rules vary. It is important to make sure that you follow all the rules to ensure you do not get disqualified for a minor error. If you ever have any questions, tournament admins are always available to sort out any confusion.

Tournaments are an exciting, challenging way to improve your gameplay, and to evaluate your level of play. Investing in the tournament scene can impact other aspects of your play by forcing you to take games more seriously, and really learn from each and every match. Recently, I have found some success in tournaments such as Hearthlytic’s hearthstone Opens and Hearthmind’s Conquerer’s Series, and with a little work, so can you. Hopefully, you can take this article as your introduction to a new style of play. I look forward to facing some of you in open tournaments!

You can keep up with my hearthstone achievements and such at

and I plan to start streaming soon at Twitch.tv/Hoarth