Blackrock Mountain is (unsurprisingly), fire and dragon-themed. It's also introduced some cool new mechanics -- one changes the stats or effects of certain cards based on what you have in your hand, and the other changes the cost of certain cards relative to the number of minions that have died that turn.

Some classes fared better than others overall, but in the end, Blackrock Mountain has more potential for constructed than arena. Still, there are some excellent cards and the possibility of great synergy and exciting wins.

Class tiers have and will remain mostly unchanged -- some cards are powerful, but there aren't any game-changers that are likely to shake up the meta. Mage and Paladin remain at the top of the heap. 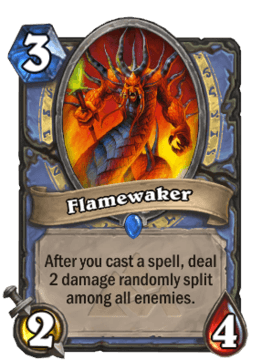 Mages are still at the top -- unless Flamestrike gets changed to a rare, they willalways have an advantage in the arena. The size of dragon bodies makes removal extra important, which is good for mages, and the mage hero power can trigger Grim Patrons and Dragon Eggs, making Blackrock Mountain a big win for mages.

Dragon's Breath has a lot of potential -- at worst, it's likely to end up being a Shadowbolt that can target the enemy hero, but on a particularly bloody turn, it can end up being free or nearly free. It's probably not worth picking over Fireball, but it definitely has a place in your deck.

The Flamewaker is even more interesting. As long as it survives long enough for you to cast a spell, it brings a mini-Mad Bomber effect, which is a hugely popular card for a reason. A 2/4 body for 3 is plenty of value on its own, making this a great pick for any arena run. 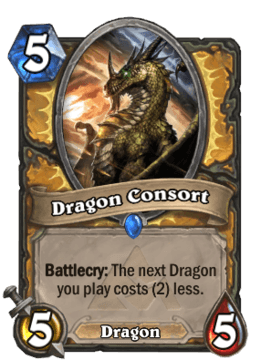 Paladins got a pretty hefty power boost with the addition of Blackrock Mountain, but it will be hard to tap into that in the arena, since it requires a lot of card synergy. Because Paladins have Dragon Consort, all dragons are more valuable to them, even in arena, allowing them to make good use of some minions that might not otherwise see play. One Paladin mainstay -- Truesilver Champion -- might see a small power decrease because of the hit points dragons have, but its still one of the highest value cards in arena.

Even without synergy, Dragon Consort is a good card -- at worst, it's a 5/5 for 5, which is solid, but if you have even one more dragon, it spikes in value. If you're lucky enough to draft Ysera or another legendary, you can put them out early and swing the game heavily in your favor.

Solemn Vigil seems tailor-made for 'Shockadin' style aggro decks, but it could see use in the arena as well. You need to see three minions die before it's any better than Arcane Intellect, so whether or not you pick this depends on the composition of your arena draft -- if you've got a lot of small creatures that can push the mana cost down, Solemn Vigil can have a lot of value.

Tier 2 is mostly the same -- not as strong as mage and paladin, but very close. Blackrock Mountain didn't change enough to move any class up a tier, but both Rogue and Shaman got access to some very strong cards. 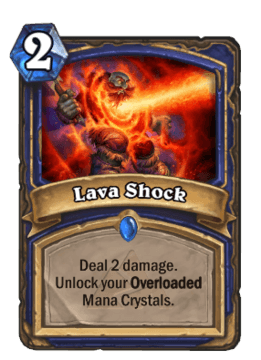 Fireguard Destroyer, on the other hand, is amazing no matter what. At the very least it's a 4/6 for 4 (or 5, counting overload), but it averages out to a 5/6 and has the potential to go higher. This is the premier 4-drop for Shamans, blowing everything else out of the water. Pick it every time unless it will destroy your curve. 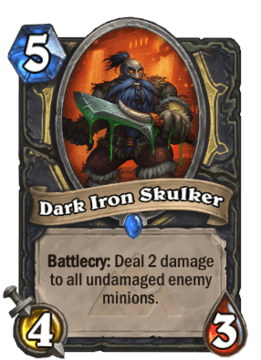 Rogue has stayed in pretty much the same place -- none of the neutral cards synergize especially well with their playstyle, but they're not useless either. Their class cards have some solid arena applications.

Gang Up is an interesting card -- card draw and card advantage is never bad, and if you manage to shuffle the right card into your deck, you could torment your oppenent with four Sludge Belchers or worse. That being said, a card that has no effect on the board is rarely a good choice in arena. Generally you should skip this unless you don't have a better option.

The Dark Iron Skulker, on the other hand, is an incredible card. AoE is huge in arena, and without easy access to Blade Flurry, rogues are short on it. This card puts a solid body on the board and can clear a large number of enemies. Draft it whenever you can.

Always solid but never exceptional, this tier has remained mostly the same as well. All of the classes got access to cards that shift their playstyle a bit, but not enough to boost their relative power. 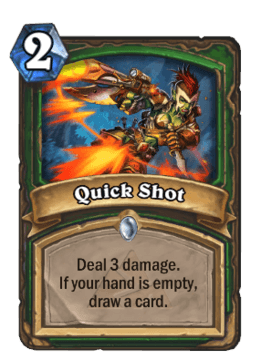 Both of the Hunter's class cards gain extra effects if your hand is empty -- while this is a rare and often undesireable outcome, it's something that happens a lot in arena. Gaining an advantage in topdeck wars is a big win for Hunters in the arena.

Quick Shot is a good card that has the potential to be fantastic. It's the same value as Darkbomb, but if you happen to be out of cards, it's 3 damage and card draw for 2 mana -- incredible value. Even if you don't ever get the full benefit of Quick Shot, it's a very solid draft pick.

The Core Rager is, most of the time, a 4/4 for 4 mana, which is fine, good even, since, as a beast, it synergizes with a lot of other Hunter cards, but if you do happen to stuck in a topdeck battle, it shoots up to a 7/7 for four, and might just win you the game. It's probably not the best rare to pick, but it's definitely not the worst. 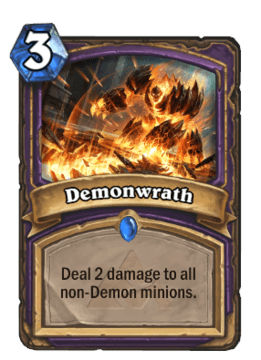 Warlocks got dealt a pretty good hand with Blackrock Mountain -- both oftheir cards, while situational, are very good in the arena, and don't require a whole lot of other cards to combo with. They also have a lot of ways to trigger Blackrock Mountain's mechanics, making them a stronger choice than before.

Demonwrath's value depends entirely on the composition of your deck -- if you draft mostly demon minions, then it can work as a 3 mana Consecrate, which is very high value. If you don't have a lot of demons, it's less helpful. It does, however, synergize very well with minions that have enrage or deathrattle mechanics like the Amani Berserker or Nerubian Egg. Shadowflame will be the better choice most of the time, but Demonwrath has powerful applications in the right deck.

The Imp Gang Boss might not seem impressive, but if it survives to spawn even two Imps, that's very good value. A 2/4 body is enough to trade with lots of 2 and 3 drops, and it synergizes well with a lot of Warlock cards that deal damage to friendly minions. With demon synergy cards like Demonwrath or Voidcaller, then this is an even stronger pick. 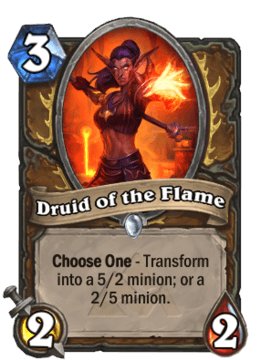 Druids are in much the same place as before -- solid and dependable, but not exceptional. They do have some potential synergy with certain dragon cards, but relying on combos -- even with commons -- is risky in arena.

The Druid of the Flame is most useful because of its versatility -- a 2/5 for 3mana is a strong drop, and can trade well with two or three minions down the curve, while a 5/2 played late or behind a taunt can trade up very well. Both versions synergize well with Druid spells like Mark of the Wild, Power of the Wild, or Mark of Nature.

Volcanic Lumberer suffers from the same issue as many Blackrock Mountain cards -- if you can't ensure that enough minions die in a turn, its value is pretty unimpressive. That being said, if you CAN make sure three or four minions die, then it has great value. It might not be worth picking over a Sludge Belcher or another, more consistent taunt, but its definitely got potential, especially if you need to boost your deck's late game. 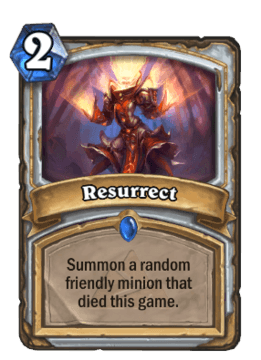 Priests got some interesting cards, but its hard to see how they'll fit into an arena deck. Still, Priests have a better chance of seeing the late game than many other classes, giving them a shot at playing some of the bigger minions released in Blackrock Mountain -- certain commons, like Dragonkin Sorcerer will be very strong picks for Priests.

Twilight Whelp, unfortunately, is inferior in every way to Zombie Chow. Even if you could ensure that you'd be holding a dragon on turn one, it's still not good enough to warrant building a deck around. Unless you've got a truly excessive number of dragons in your deck, skip this.

Resurrect is a card for gamblers and optimists. At 2 mana, it has a very good chance of reviving a minion worth more than that, creating excellent value, but depending on which minions have already died, it can also backfire or pull something worthless. This is worth taking over some less useful rares, but unless you like to bank on RNG, its not a solid pick. 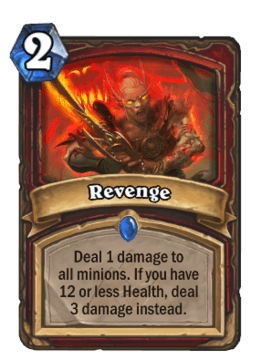 Though a great class in constructed, the Warrior still suffers in the arena from needing combos and synergy to be competitive. With that in mind, the Warrior is one of the best classes to get value of out Grim Patrons (if you draft a Bouncing Blade, for example, their value goes through the roof) and is maybe one of the few classes where picking Majordomo Executus is a good idea, since they can stack armor.

Axe Flinger is, unfortunately, not a great card. 2/5 for 4 is poor value, and its unlikely that you'll be able to trigger the mechanic more than twice. Plus, face damage isn't terribly useful in arena -- you want board clear and presence. That being said, the more Whirlwinds and Cruel Taskmaster's you have, the more likely that you'll be able to make something of the Axe Flinger.

Revenge is a little better -- at worst, its Whirlwind for 2 mana, but if you're under 12 health, it's a very cheap Hellfire. The only issue is that you don't want to bank on being under 12 health -- it's just kind of risky. That being said, Warriors lack board clear in arena, and this is a strong pick for that reason alone.

So there you have it! Though most of Blackrock Mountain's new cards require some synergy to be more useful than existing options, there are a few that are excellent no matter what. The Drakonid Crusher is at worst a 6/6 for 6, but can be a lot more, and the Hungry Dragon can be powerful in the hands of a skilled (or lucky) player. Do your own testing, experiment with choices, and tell us what you think! Good luck!