Often referred to using the honorific “Magus”, Medivh’s place in the pantheon of Warcraft classes  is slightly muddled. He has been at different times been classified as a mage, sorcerer, archmage and even called a warlock – all the while being known to move around transformed into a raven, something that is usually the exclusive domain of druids.

Fittingly, the alternate Mage Hero’s story is equally convoluted. Born from Aegwynn, one of the most powerful mages in the history of Azeroth, while she unwittingly harbored the spirit of her arch-enemy Sargeras, lord of the demonic Burning Legion, Medivh was a victim of demonic possession since before birth.

Aegwynn herself did not bear Medivh due to any motherly desires. Her purpose was to have a suitable vessel to harbour her power and title as the Guardian of Tirisfal, ultimate defender of Azeroth against the Legion’s forces. The young Medivh, then, had hidden within himself both the powers for the salvation of Azeroth, and its greatest enemy.

The unleashing of these conflicting powers threw him into a coma while adventuring with his two friends, Anduin Lothar, future Knight of the Silver Hand, and Llane Wrynn, prince of Stormwind. He lay in the coma for 20 years, all the while being cared for by the clerics of Northshire and Lothar. At one point early in his coma, he woke up, brimming with magical power, and his father, Nielas Aran, struggled with him as to protect both him and those that surrounded him. Nielas succeeded in containing his son’s magical outburst, but lost his life in the process, and Medivh fell back into the coma. He was a man grown when he finally awakened.

The fact that he was then a young mind in an adult body, one that was filled to the brim with the potential for wielding enormous magical power, molded his personality in a unique way. He was considered a gentle soul, both powerful and wise, and one that put his kingdom and friends before himself, and in fact distinguished himself in his role as a guardian, defending the people of Azeroth from demonic threats.

But sometimes, the devil stirred within him, and he became aloof, and withdrawn. Unbeknownst to his friends and allies, when his personality flipped, he would covertly work to bring the Legion closer to Azeroth, even assassinating colleagues if it was deemed necessary. It was in this way that he worked with Guldan to ultimately bring the horde to Azeroth. 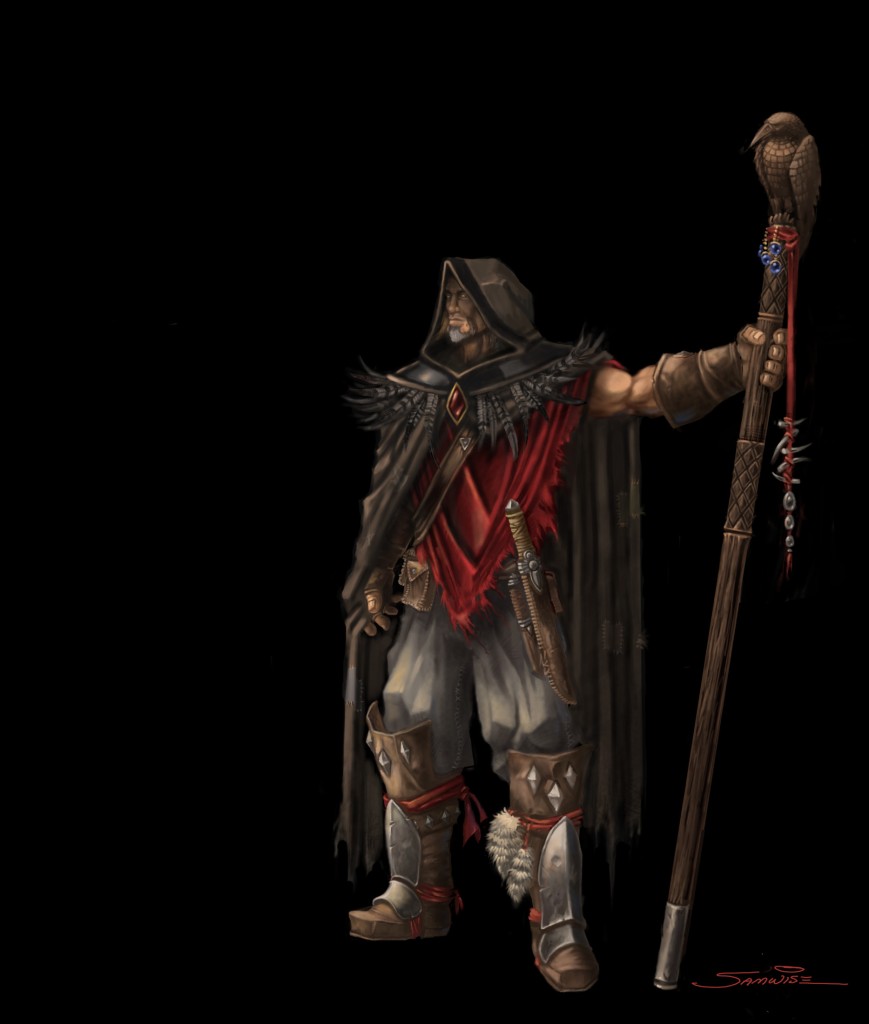 It was also at this time that his mother Aegwynn finally understood that something was deeply wrong with his son’s behaviour, and confronted him. Medivh turned aggressive and the magical duel that followed left them both drained. Ultimately, Medivh won, but, not totally in the thrall of Sargeras, he didn’t finish his mother off, instead opting to magically banish her to the far-off continent of Kalimdor, setting up magical wards to make sure she led a peaceful life for her remaining years.

By the time the horde invasion was in full force, Medivh succumbed completely to the possession, his guardian side unable t

o displace the will of the dark titan Sargeras.

At this time, it was only the timely intervention of Khadgar, his apprentice, his childhood friend Lothar, and Garona – the half-orc that he had a brief affair with, and that would eventually carry his son – that put an end to his madness, destroying his physical form and banishing Sargeras from the world.

This event has been portrayed in many ways throughout the several games, but the canonized version is probably the one depicted in the novel “The Last Guardian”. In this novel, the author even goes so far as to find a convoluted explanation for Khadgar, Lothar and Garona to be wearing Stormwind soldier uniforms, keeping some consistency between the book events and the games, where the player uses a squad of Stormwind soldiers to assault Medivh’s lair.

Despite the destruction of his body, the spirit of Medivh, survived, and his mother Aegwynn, still very much alive and having tenaciously and slowly recovered some of her power after her defeat, managed to use those remnants of her power to resurrect him – into a form that, in his own words, is not human but something “different”. Thus reborn, and finally free of the demonic influence that had struggled within him since birth, he became the prophet who, in Warcraft III, attempted to guide the mortal races of Azeroth in preparation against the coming invasion of the Legion.

He met heavy resistance from the kings of all human kingdoms, and even Archmage Antonidas

himself, who thought him a madman. All of them were much more preoccupied with containing the plague of undeath that assailed the northern lands, and were either unwilling or unable to see it’s relation with the Legion’s return.

It’s worth pointing out, at this point, that most humans were unaware of the existence of demons, and even the mages of Dalaran, due to the actions of possessed Medivh himself, had lost most experts in demonology, and thus, had little knowledge of the Legion.

Despite his failure to convince the larger kingdoms of men, he ultimately found allies in Jaina Proudmoore and Warchief Thrall, and succeeded in creating an alliance between them and the reclusive night-elves, an alliance that was able to withstand the attack of the invading force. In the aftermath of the victory, he declared that, having at least partially atoned for his past misdeeds, it was now time for him to take his place among the legends of the past.

Despite there being some references to Medivh in World of Warcraft ever since, the Guardian seems to have vanished to parts unknown, and his staff Atiesh, as well as the role of spearhead in the fight against the Legion, has been taken up by his apprentice, Khadgar, who played a prominent role in the current World of Warcraft storyline, and seems primed to do the same in the upcoming expansion.

With the Legion once again mounting an attack on Azeroth, if Medivh is ever set to come back, now would be the time for it to happen.

ends up being a miss (no pun intended). The spell, originally a magic spell from the first edition of the tabletop RPG and progenitor of the RPG genre, Dungeons and Dragons, dubbed “Magic Missile”, had no random component. Users would cast a missile – or multiple missiles, depending on their character level – and choose a target.

World of Warcraft’s implementation, meanwhile, lets you target a single enemy for the whole volley.

Hearthstone’s version is much more RNG. On the other hand, perhaps this is for the best – if the spell followed the original implementations, it would only be one more damage spell like many others. The current incarnation may be infuriating at times, but at least it keeps players guessing.

This is why Mage had to be blue, right? Magic the Gathering devotees will recognize Hearthstone’s Counterspell

as the counterpart (again, no pun intended) to Magic’s Blue color most iconic spell. The spell that came to define Magic’s Blue color as the permission / control oriented choice, it could be played in the opponent’s turn to negate his playing of a card.

Hearthstone, not allowing for playing things on the opponent turn, naturally turned the dreaded card into a Secret, and nerfed it slightly, restricting it to negating only spells, as opposed to any card.

To this day, the Mage continues the fine tradition of the Blue Deck. Opponents are left wondering: “Does he have a counter?”.

continues the fine tradition of nearly every Blizzard game having a Blizzard spell – thematically it really wouldn’t fit Starcraft, so they skipped that one.

This is another iconic spell from Warcraft II’s Archmage, and there it worked in much the same way as its World of Warcraft and hearthstone counterparts, damaging and slowing units – with one important distinction: the original spell could also damage friendly units. That wouldn’t have been very fun in WoW, and in Hearthstone, is the domain of the Shaman and the Warlock.

is, along with the Paladin’s Divine Shield, one of the most powerful self-defense abilities in World of Warcraft. The Mage, encased in a block of ice, is virtually invulnerable, in such a way that the spell is often used during boss encounters to “cheese” some fatal or near-fatal mechanics – much like its hearthstone counterpart.

was once considered a skilled yet reckless mage, and for that he was disregarded by his peers. Yet that all changed when he was sent together with Alleria’s sister, Vereesa Windrunner, to spy on the remnants of the Horde right after the second war. Their mission eventually escalated into freeing the captive Dragon-Queen Alexstrasza

’s plans for dominion over the human kingdoms. Rhonin suddenly found himself a respected hero.

Due to time-travel antics (surprisingly common in Warcraft’s fantasy setting) he eventually found himself as a key player during the first invasion of the demonic Burning Legion, 10000 years before his birth, a time when he met many iconic heroes and foes, such as the druid hero Malfurion Stormrage and his brother, Illidan Stormrage

, the latter which he actually mentored. His actions there earned him the friendship of Nozdormu

, master of the Bronze Dragonflight, as he went back to his own age.

After leading Dalaran during the campaign against the Lich King, Rhonin met his end defending the city of Theramore from the mana-bomb attack planned by Garrosh Hellscream, not without first nominating Jaina his successor as the Archmage of Dalaran.

The death of their hero and leader due to the Horde Warchief’s attack made the formerly neural Dalaran once again hostile to the Horde, though it is rumored that Medivh’s former apprentice, Khadgar, is working to fix this, as, much like his master before him, he struggles to unite the mortal races of Azeroth against the new attack of the Legion.

I hope you enjoyed reading about the Mage hero’s lore. If you haven’t already, check out the lore articles about the Paladin Hero, Notable Paladin Cards, The Mage Hero, and Notable Mage Cards.

What’s your favorite mage card? And do you play as Jaina, or Medivh ? Let us know in the comments!