We've been offering great hearthstone content to you since the game was in beta. With the release of the Grand Tournament, the third expansion of this hit collectible card game, it's a great time to get into playing -- or back into, for lapsed players!

In short, control refers to holding an advantage over your opponent. If you end a turn with minions on your board and no minions on your opponent's side, you've got control. If you don't have control of the board, you'll want it back as quickly as possible -- and the mage's focus on spells is very helpful in achieving this. 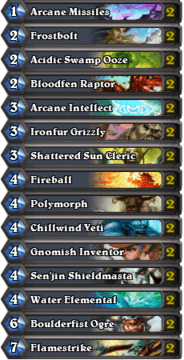 There's a pretty even mix between class-exclusive cards and neutral minions here. This basic deck focuses on the lower to middle range of the mana curve, so you'll almost always have something to play with right from the outset. An important aspect of maintaining control of the board is being able to keep up the pressure on your opponent, and this can be achieved in part through always having something ready to play on your turn.

A great starting hand for this deck would be a Bloodfen Raptor, a Shattered Sun Cleric, and a Chillwind Yeti. The Shattered Sun Cleric's ability to make the Raptor into a 4/3 creature on turn 3, alongside her modest stats of 3/2, allow you to handily answer any early challenge from your opponent.

Of course, it's not often that things go so neatly. Laying down an Ironfur Grizzly is a great way to save injured minions early on in the game and allow you to choose the trades you make. The Acidic Swamp Ooze has identical stats to the Bloodfen Raptor, with the added advantage of destroying any weapons your opponent has. If you're fighting a class that does not commonly use weapons or you've got nothing else early in the game and you need a creature down now, play it. Otherwise keep it in reserve. Destroying your opponent's weapon could save a minion or otherwise turn the tide of a game in its later stages.

It might be tempting to play the Gnomish Inventor earlier in the match, but hold out if possible and save her for when you've got access to all ten mana crystals. With this deck, the best case scenario is that her battlecry allows you to draw and play either the Boulderfist Ogre or a removal spell that you need. If you've got the Coin, it's possible to play her, draw Flamestrike, then use the Coin to get that vital extra mana crystal and possibly clear out your opponent's board.

Be careful playing it against a Priest, however -- Shadow Word: Death costs only 3 mana and can destroy a creature with 5 or more attack.

You're playing as a mage, so it stands to reason that you have access to some amazing spells! Within the Basic set lie some of the best spells in hearthstone, period. Whether you're worried about a Hunter in your face, a Paladin (and all his buddies), or a Priest's single-target buffs, this deck has an answer!

Costing just one mana, Arcane Missiles is a great early game option for shutting down weaker minions and gaining an early advantage. You might be tempted to swap it out for Arcane Explosion, which strikes all minions for 1 Health, but the ability of Arcane Missiles to hit the same enemy multiple times is crucial.

If it's just a single minion giving you grief, Frostbolt is an excellent choice -- early in the game, it's enough to take care of enemy Bloodfen Raptors and other 2/3 minions. In mid and late game, Frostbolt's freezing ability really comes into its own, allowing you to delay a stronger minion or enemy weapon long enough to prepare a reply. Its low cost allows it to be played alongside stronger spells.

Fireball won't set the pond on fire when it comes to originality -- everything else, however, is fair game. At 4 mana, it deals 6 damage to any single target, and its cost leaves room for it to be played in combination with other spells in your deck. Fireball and Fireblast together, at 6 mana total, are enough to take down cards like the Boulderfist Ogre and Gurubashi Berserker. Fireblast can also be used first to break a minion's Divine Shield, before finishing them with Fireball.

If you're lucky enough to have two Fireballs in your hand, you have the chance to achieve a surprise victory. Combining them with Fireblast allows you to defeat any Hero at 13 Health or below.

An opponent conscious of Fireball's power may instead try to fill their board with cheaper, weaker minions and overwhelm you. As touched on earlier, Flamestrike is an excellent counter for this, as it deals 4 damage to all enemy minions. Chillwind Yetis and Sen'jin Shieldmasters will survive this with their 5 Health, but can be picked off with your Hero Power or Arcane Missiles.

This deck is a great way to learn about control and plays to the mage's strengths nicely. As you play hearthstone, you'll find yourself accruing more and rarer cards. Upgrading and customizing decks is a big part of enjoying a game like this, so let's take a look at some complementary options!

Before considering your options, it's a great idea to first read our Beginner's Deck Building Guide. It's vital to retain a good balance between spells and minions, and to have a decent distribution of mana -- though as you refine your strategy and become more experienced, you'll be able to make very specific decks that ignore these guidelines.

The Bloodfen Raptor is a good target for replacement. There are several two mana cards that are 3/2s and have an additional effect. Knife Juggler is a popular choice from the neutral set, and you'll see him in many decks. From the latest expansion, Fallen Hero is a fantastic upgrade, allowing you to do two damage with your Hero Power instead of one. Sorcerer's Apprentice is also a great outright upgrade that will reduce the cost of your Arcane Missile to 0.

Other targets for straightforward replacement include the Sen'jin Shieldmaster, Gnomish Inventor, and Boulderfist Ogre. The former for Sludge Belcher, and the latter two for heavy hitters, or cards with additional effects like the Stormwind Champion. It's the perfect place to bring out that Legendary card you picked up and have been dying to try!

Most of all, this basic deck is about practice and experimentation. Get a feel for when to carefully pick off minions and when it's better to just go for it. Look at what others do in reaction to your deck. Play, tinker, and play again as you learn, and let us know in the comments how you do with this deck!