Obviously, as the meta has gained more and more answers and viable archetypes, that 2 mana is becoming ever-more precious, and while it's great to be able to replenish your hand after unloading all of your little minions onto the battlefield, one measly card is starting to feel like too little.

Luckily for the aggrolock (and perhaps unluckily for everyone else), they have some new toys to play with now that League of Explorers is here, and they give this archetype exactly what it needs to dominate.

Let's start with the star of the show: 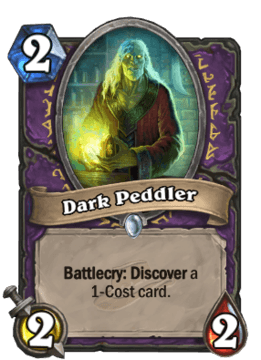 He might not seem like much, but he's actually everything this deck needs and more. Peddler is a fire-and-forget two mana minion that automatically replaces himself. And in case you've forgotten, there are a metric ton of one mana cards in hearthstone that go perfectly with the aggro warlock's game plan.

And with class cards being 420% more likely to dig up than any other with the discover mechanic, that means we'll be seeing free soulfires, power overwhelmings, and flame imps very often. Not to mention the slew of neutral one-cost minions that most aggro warlocks love to use.

A solid turn two play that gives you a body and another option in your hand, or a devastating turn three play that has the potential to put 5 power and 4 health's worth of minions on your board (assuming an imp / peddler play). 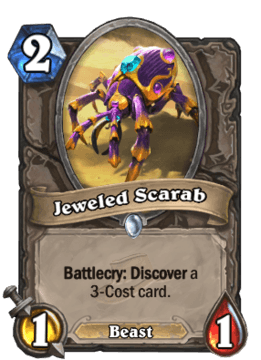 Then there's this guy.

Normally, shoving cards that cost three mana into your aggro deck isn't the best of ideas, but with jeweled scarab, things get interesting. Sure, he has a weak body, 1/1 isn't much to write home about, but his ability to discover a 3-cost card?

Even if the effect is somewhat RNG-reliant, three-mana cards can supply a good amount of utility and later game presence for when those piddly one and two drops just won't cut it. 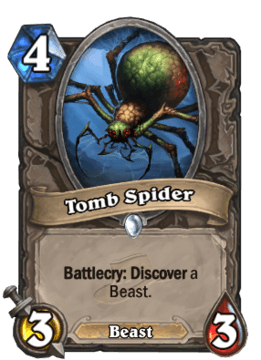 The bigger of the two discovery beasts available to the warlock is a little iffy, specifically because of the mana cost. The value he gives can be staggering. Beasts go far and wide in costs, but they're also some of the most devastating types of minions in the game.

Free King Krush to hand? Sure. King Mukla out of nowhere? Gladly. Even Dire Wolf Alpha fits in with the aggrolock's gameplan, and this card can kindly nestle it right into your hand.

While I think the first two minions are the real stars of the discovery hype train, this spider definitely isn't anything to sneeze at. And while any deck could capitalize on the free beast, the sheer aggressiveness of an aggro deck would probably be the best home for carelessly dropping it into play.

And of course, the big one-mana bomb of the set: 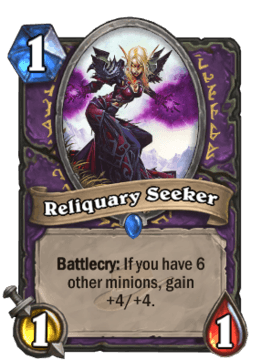 The synergy she brings to the deck is devastating. Haunted Creeper was already an annoyance. Now it's a threat that brings you two steps closer to a huge value creature. Obviously this is a minion that demands greedy and fast plays to maximize its value, and while its requirement may seem prohibitive, so long as you aren't seeing it in your opening hand, it has devastating potential.

Of course, I wouldn't be mentioning these cards if they were all League of Explorers had to offer. 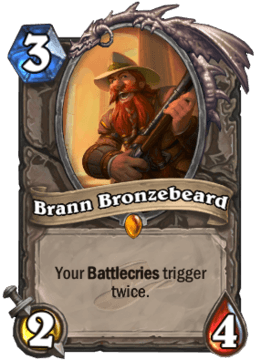 Brann is a nightmare scenario for your opponent. Not only is he bulky enough to reliably jump onto the battlefield turn 3 with little repercussion, but sandbagging him and, say Dark Peddler, for turn 5 while you're busy vomiting out your little guys early on gives you a rapid-fire refill.

Discover battlecries and Brann go together disgustingly well, and the sheer advantage they give while letting you wantonly overextend is just amazing.

Suddenly, your peddlers, scarabs, and maybe spiders are not only replacing themselves in your hand once they hit play, they're giving you a card. And the dream scenario of Brann and Reliquary Hunter? Your opponent's going to have a bad time recovering from your one mana 9/9 minion.

With the possibility of the discover mechanic in the hands of aggrolocks everywhere, fearing area of effect spells will be a thing of the past. What does it matter if you can clear away a fat board full of minions if those minions didn't really cost cards to play?

Obviously, the meta is an unpredictable and wild beast, but even if this isn't the deck to beat, it seems League of Explorers has guaranteed that zoolock isn't going anywhere anytime soon.